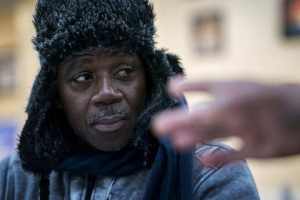 (Where does he hide and reside, before he reappears?)

No spring chicken he, but tall, lean, spare,
forever young may be safe how to describe;
seemingly ageless, watchful, omnipresent,
the Inkman you can’t ignore, so best to imbibe.

His Ushanka hat, it appears, defends against cold,
but I strongly suspect it doesn’t, and just a ruse.
As his lighted, always-same-length cigarette,
creates a safety zone, as smoke enshrouds, accrues.

Look up, he’s visible, dimensional, look again … vapor!
Where does he hide and reside, before he reappears?
For sure, it can’t be here where the subway cars roam,
as I envision him conquering new news frontiers.

The Inkman, aerial, lofty, standing almost on air,
he doesn’t report on or make news, only its ink.
In another life perhaps, long ago or yet to come,
I see him as an emissary in armor, without chink.

Daillllly Newssss … Daily News he avows,
I exit the train daily searching, but have faith.
I scan his platform and stage, where he performs,
a crier, relentless, storied, at Market and 8th.